Prior to this trip, Badagry and Olumo rock have won my heart in terms of organization and attitude towards visitors. On sighting me at the gate, the 5 of them parted their lips, letting out different shades of smile. It was obvious they were all happy as I immediately felt welcomed. The breeze escaping through the woods continuously attacked my face. I didn’t bother restraining them.

I greeted and they returned the gesture before introducing themselves one after the other. I felt more pleased as I was introduced to my tour guide Mr Paul Bamigbaiye who led me to a large beautifully designed space which served as the reception where I made payment after being given the breakdown. It costs #1,000 for an adult and #500 for children. this is excluding the tour guide’s fee which has to be negotiated.

Leaving my bag behind, I held closely my bottles of water with my camera strapped round my neck while I listened to the briefing of our proposed journey by Mr Paul.

FACT 1:
IDANRE HILLS WAS ADDED TO THE UNESCO WORLD HERITAGE TENTATIVE LIST ON OCTOBER 8, 2007 IN THE CULTURAL CATEGORY.

Idanre is classified into 2 (the ancient one atop the hills and the modern one down the hill).

The people of Idanre spent 800 years dwelling on the hills before descending it in 1928 (4 years after deliberating on it) due to the lack of access to civilization. They left behind all their notable monuments such as:

– the court of justice

My heart skipped on hearing that we have approximately 700 steps to climb before getting to the summit (but with 5 resting points). That’s crazily more than that of Olumo Rock and Ado Awaye. But hey, “I’m up to the task” I said to myself, beaming a soft smile as Mr. Paul summoned me to follow him.

After taking about 20 steps, he turned to give me a warning. He had stopped smiling. “Please Tunde, try as much as you can not to curse anyone or think ill about anybody all through our journey as this is the only forbidden act here. Instead, you should pray for those who have made you happy.”

I didn’t bother asking why because I’m more than eager to climb as I did a quick scan on my mind to see if anyone warranted a curse from me. No one, save for the Nigerian government who have done nothing really impressing to harness the potentials of tourism in the country. But since they on a daily basis get cursed by other citizens, I tuned down my rage, switched to my prayer mood saying stronger prayers for Mr Tayo Sonuga, the Managing Director of Haven Homes who funded my trip.

Before long, we were at the first resting point. Mr Paul said we had taken 75 steps. Though I felt we had taken fewer so I decided it wasn’t time to rest. I gulped a mouthful from my bottle, offered Mr Paul some but he declined. We continued with 150 more steps to reach the 2nd resting point and another 137 to get to the 3rd. I decided to rest, gulped even some more fluid and took some more pictures. 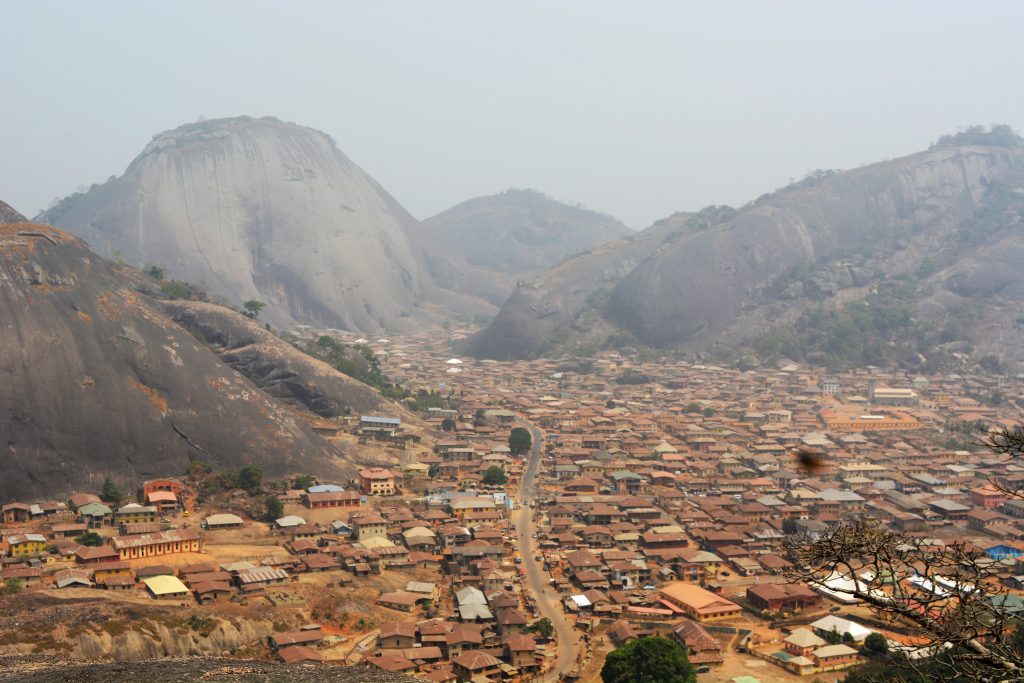 All along I engaged Mr Paul, trying to know why the Idanre Hills is in such a dilapidated state. Starting with a deep breath, He responded by explaining how the previous government had decided to do a face-lift for the resort by inviting an engineer who started out with the beautification but couldn’t finish due to his replacement by the new government. I probed further by asking if tour guiding is what he does full-time, he answered yes but lamented about its numerous inadequacies.  He currently doesn’t get any salary except commissions based on how many trips up the hills he’s able to complete periodically. I imagined how crazy survival will be for him considering the poor attitude of Nigerians to tourism. No thanks to the bad roads and very high cost of living. I was tempted again to say few curse words but refrained on remembering the warning I got downstairs.

We soon got to the topmost part of the hills after taking 320 more steps. My legs had started to ache but the views into the new Idanre town was mind-blowing as we were greeted on the left by dilapidated chalets which must have been deserted for a long period of time.

In saner climes, revenues from these chalets would have been put to more efficient use. But again I was at the tip of the peak. I don’t want to risk anything so I suppressed my rage. No curses.

After more than 50 pictures and several video recordings, we left to explore other parts of the ancient town.

The sun seemed to be mating with the trees as they combined to bless us with an amazing kind of  breeze as I gulped more liquid from my bottle.

We passed by the thunder river where Mr Paul stopped to tell me the story behind its name.

According to him, there was an unusual drought in Idanre town during the war against the people of Oyo who were with just one goal at the time; take over as many territories as possible. As the condition grew worse without rain, the priests in conjunction with all medicine men in the land converged at that spot to say some prayers. During the course of their prayers, thunder struck and it rained heavily that night so much that it flowed continuously to form the river.

“This Thunder river also contains some magical powers such that whenever the warriors were going to war, they have to drink from it and also confess their satisfaction, else, they will only go and not return from the battle. 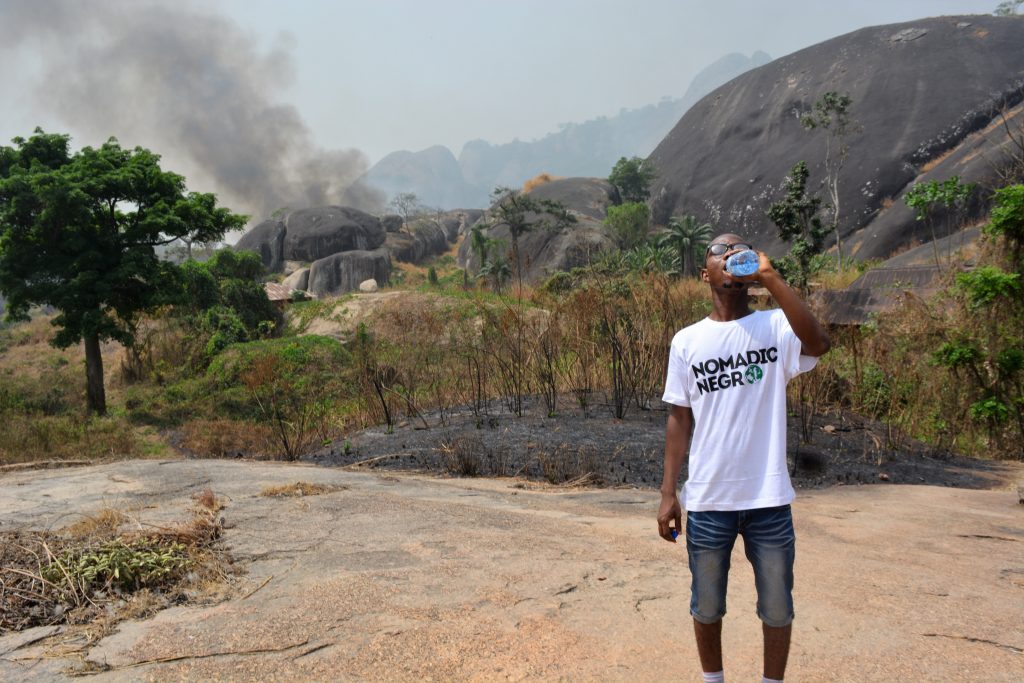 The First School In Idanre

We soon got to Odeoja, (the market square) passing through a path called Ese Ogbeji, meaning walking side-by-side,  two people cannot pass through at the same time due to its narrowness. The deep valleys on both sides made it more frightening.

During wars, this spot served as the checkpoint where all unauthorized beings were fed to the valleys. Horrible thoughts paced round my heart as I requested that we continued into the forest.

We soon stumbled into an ‘agbalumo‘ farm where a number of them were lying helplessly on the withered leafs on the floor. We helped them by stuffing them into Mr Paul’s pocket till there was no more space.

Venturing further into the forest, we saw about 6 bees having a field day pursuing one another. I guessed their queen must have gone for a meeting or something more important which must have given them such opportunity. I reached for a ripe cashew hanging on the tree and devoured it on the spot. You know that garden of Eden feeling?

Next was the Court of Justice which was directly facing the prison.

The marketplace and the mausoleum where kings are buried. 25 kings have already been buried in this building. The 26th king who is currently 91 years old will, after his death be buried alongside his predecessors here.

Intrigued by the smallness of the mausoleum, I asked how 25 kings fitted well inside it. Mr Paul smiled before explaining that there are numerous ways of going about the burial in Yoruba Land. One of such is by beheading and splitting other body parts of the king to all important parts of the land. The heads most of the times are kept in this mausoleum. I made sense out of this narrative. 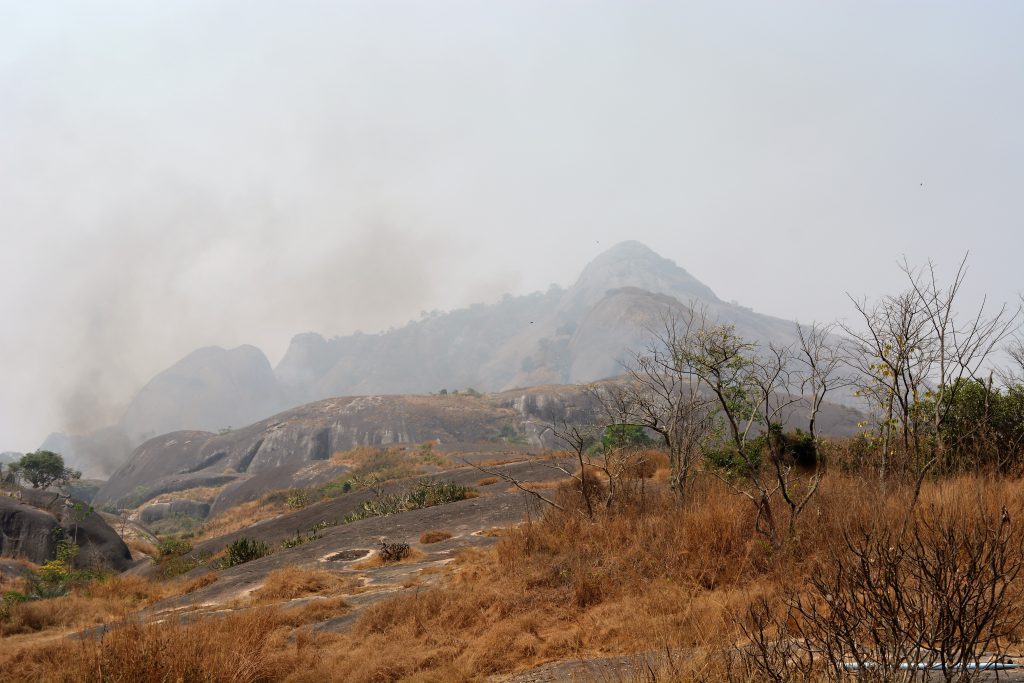 This stone (located right in front of Chief Ojomu’s house) served as the true test of marriage capability in the ancient Idanre. A man will not be allowed to get married to his fiancée if he fails to lift this stone. Chief Ojomu is one of the highly placed chiefs in ancient Idanre.

Then The Wonderful Rock

I asked what makes it wonderful and he pointed to the small piece of rock preventing it from rolling over. it’s been like this for hundreds of years.

The Ancient palace which also doubled as the conference centre was fully guarded by warriors and slaves from several parts of Nigeria.

This beautiful piece was written by Phillips Tunde who writes about his travels at www.nomadicnegro.com and shares his travel images on Instagram @nomadic_negro.

Do you have a travel story to share with images? Get in touch with us here or on any of our social media.